Anglophone disciples call him master.  The Italians, maestro.  But Willi Geller, considered by many to be the world’s leading dental ceramist, is far from a household name – even among most dentists.  After all, the exorbitantly priced, artisanally handpainted ceramic teeth he crafts in Zurich have just one identifying feature: They’re nearly impossible to tell from the real thing.

“We try to make natural-looking white teeth, not like Chiclets,” says the Austrian ceramist, 69, who has a mouthful of pearly whites – the result of his own handiwork, of course.  Geller doesn’t perform dental work himself but rather consults with dentists to create veneers and crowns tailored in shape, size and color to suit individual patients.

“I always say, he makes teeth, other technicians make crowns,’ says Fritz Kopp, a Zurich cosmetic dentist who has known Geller for decades and collaborates with him frequently.  “Sometimes I have the idea that he already knows when speaking to a client on the phone how his teeth are positioned in his mouth.” 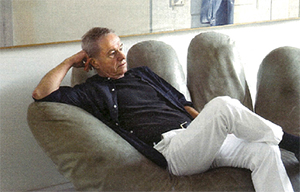 When Geller began plying his craft 40 years ago – he made the dramatic switch from woodcut textile print-maker to aesthetic laboratory apprentice at the suggestion of a friend—false teeth were created by painting solid colors on standard forms, a method that resulted in a monochromatic look.  Geller was one of the first ceramists to realize that teeth reflect and refract light like prisms, thanks to their layers of material, including dentin and enamel, and should be made to look as such.  He devised a lateral buildup technique involving the layering of different densities of porcelain powders in various colors and degrees of translucence.  For instance, there may be a shimmer of blue on the tooth’s surface that comes from opalescence put in the middle.  Now practiced and taught by an elite organization of 80 ceramists and dentists, the method can be used on everything from veneers to caps, crowns and implants.

“I would say it’s like a painting technique from the Old Masters, when we do layer on top of layer and you get all these different shades,” Geller says.  Next the teeth are put in a kiln and fired.  The final results can trump nature both visually and functionally.

“You have teeth that fit within the patient’s face, and they don’t look too big or bulky,” says Manhattan cosmetic dentist Michael Apa, who has collaborated with Geller’s U.S. counterpart and protégé, Jason Kim, on teeth for Chloe Sevigny and Veronica Webb.  “Now they’re reflecting and refracting light like real teeth.”

The fabrication process is time-consuming and expensive.  An upper arch of 14 veneers, for instance, can take up to a week to craft, and a single veneer can cost as much as $3,200.  It’s a price many patients are more than happy to pay.  “I consider him to be an artist, absolutely an artist,” says Tel Aviv cosmetic dentist Ady Bayer, who has on occasion made multiple trips to Zurich, high-profile patient in tow, to collaborate with Geller on a single set of teeth, from fit to finishing touches.  “He doesn’t take everyone.  You have to reach a certain level to work with him.”

Geller’s work is all done in-house, on benches he designed.  He uses only the porcelain powders that he creates and sells under the name Creation Willi Geller to dentists and ceramists worldwide.

“He’s sort of like the guru of dental ceramics – and the unsung hero,” says Manhattan cosmetic dentist Marc Lowenberg, who works with Kim on veneers for his patients, including Chris Rock and Russell Simmons.  “When the average person comes here, they assume that it’s all about the dentist.  But it’s always about the dentist and the ceramist.”

The partnership is not without its obstacles.  Dentists trying to reach Geller must rely on archaic methods of correspondence, as he’s not a fan of the cell phone or the computer.  “They write me letters, you know,” he says.  “It’s nice.”

Such a back-to-the-future lifestyle approach is in sync with the trade he helped mold.  “We have a wonderful handcraft profession,” says Geller.  “It may be one of the last lost.”     --Jennifer Weil